What happened to MegaSex I?  Did it sink?  This picture was taken in Lisbon and I thought it was a comically bad name for a business. However, I’ve found that the name of a business doesn’t really matter if you have a solid business strategy.  Recently I’ve been doing some absent-minded thinking on the variety of modern business models. I will not profess that I have any professional experience or even any knowledge on the subject, but most of the time business models seem like common sense. If you create something of value, design a framework that keeps people interested, makes you money and does it all without alienating the fans.  Here is a sampling of business models that I’ve noticed in the past week.

The Good Model: Hulu
Hulu is a relatively new website that takes copyrighted material like TV shows and movies, uploads them on to the internet and provides them to the public for free. This concept is not new at all, illicit and freely available piracy sites come and go daily. What sets Hulu apart is that it’s legal and even encouraged by the copyright holders.  Unlike sites like YouTube that scrambled to make videos profitable, Hulu formulated a model and stuck to it as the traffic poured in (but it is important to note they had $100 million in venture capital backing them).  Short video ads are interspersed with the vast amount of content to make money and scale based on the length of each clip, episode or feature film.  I hate advertising as much as the next person, but when it’s a 15 second break between the Daily Show in HD, I will gladly endure.  I see this as the future of television, I just hope they can keep it as profitable and smooth as it seems now.

The Bad Model: Remember the Milk
What makes me sad about this business model is that I love this little web application.  It’s a simple idea of an online to do list to aid forgetful people in everyday mistakes, like remembering the milk.  It has a heartwarming story and is run by some nice playful people, but they have a truly crummy model when it comes to making a profit. 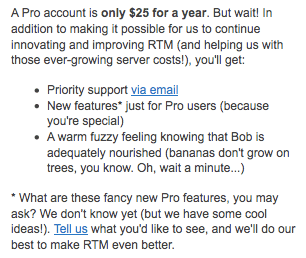 The photo on the right is taken from their website and is the explanation of why users should sign up for a “Pro” account.  Many sites have this approach (Flickr, gmail, etc), but Remember the Milk cuts the basic services and forces you to pay for them instead of adding new features.  Let me explain further.  Gmail and Flickr add the storage space available to you.  They implemented this by keeping the great free services consistent and just adding these features under a new account header that appeals to heavy users.  Remember the Milk took the basic concept of a to do list and ported it onto phones, but than revoked those features and slapped on a ludicriously high $25 a year price tag.  I say ludicrously high because on principle, a to do list should not have a subscription based business model.  This is software, that could even be implimented offline, not a service that requires continued fees.  ISPs, cable and phone companies all have legitimate reasons to have continued fees (don’t get me started on text messages, I could rant about that for a while).  The bottom line is that Remember the Milk is a poor excuse for the Freemium business model because they have yet to impliment premium features worthy of their price tag.

Last Word: It’s hard for me to judge these businesses when I’m pouring myself into a blog that isn’t ad supported and is mostly a drain on my free time and money.  Luckily, I enjoy doing this and I do it for my own satisfaction (which is why I took a month to tell anyone it even existed), but if I come up with a simple business model, who am I to turn it down.  In the meantime I’ll be waiting for the right job offer, partnership or other opportunity to come my way.