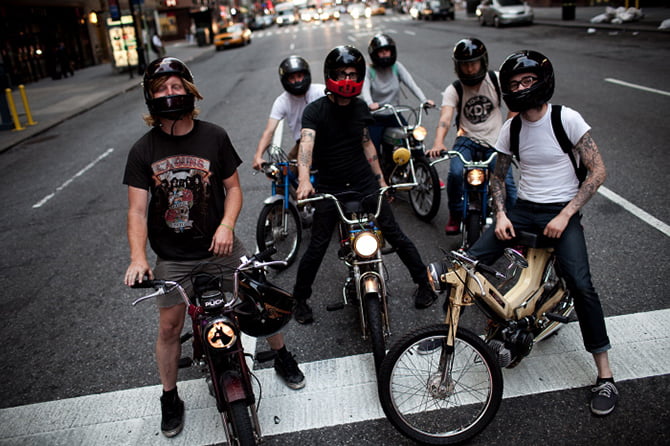 Wired’s Bryan Derballa recently published a photo essay on the growing moped communities around the country and their passionate fascination with the fuel-efficient, but ailing, and often discarded, motorized bikes. Derballa’s three week immersion into the moped culture involved a run-in with the police and a group ride through Times Square.

The vibrant moped community in Brooklyn is centered on a little shop called the Orphanage in Greenpoint. The group support the little collection of bikes rescued from obscurity and repairs them to sputtering, though working, order. The mopeds often top out at 30 miles per hour and the little two-stroke engines pollute more than their larger counterparts, but more and more people are falling in love with these forgotten machines. This subculture, like much of the so-called hipster culture, thrives on the use of outdated technology like typewriters or NES consoles, though the moped community boasts a strong online forum. Beyond the Orphan gang of Brooklyn, there are moped “gangs” in most major US cities, including the Creatures of the Loin in San Francisco, the Puddle Cutter of Portland and Hell Satans in Richmond.

Originally written for and published at PSFK.