Over this past weekend I had the opportunity to stay with a family in northern England. I was initially told I would be Shap, but when I asked about the town to the family, they let me know that I was actually closer to Penrith in Cumbria county. It started with a short three hour bus trip from Edinburgh. For some reason, this trek warranted an intermission at a truck stop. Since I hadn’t eaten dinner yet, I was forced to get some grub. My options were slim and I was not about to pay £5 for a chilled “egg-mayonnaise” sub. I ended up getting some onion rings to tide me over at the local fast food place. It was called, “Wimpy” and the onion rings were delicately plopped into the deep fryer directly from the freezer bag. Aside from being the store most likely to fail in America, Wimpy had some terrible “chips.” I boarded the bus again full of hot grease and general unhappiness. Luckily the family meeting us at the random parking lot (along with all the other families) was incredibly friendly. They had already loaded up on groceries for the weekend and we chatted on the drive through the countryside back to their house. The family consisted of two teenage girls, their mother and a wonderful pooch. 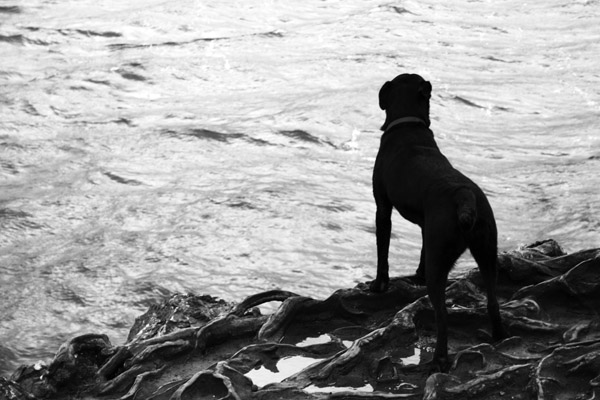 The first night consisted of a home cooked meal and generally awkward conversation. To make the situation worse, my stomach was grumbling loudly throughout the meal. Each uncomfortable lull in conversation as accompanied by a symphony of MMMMAAAHHH and GRUHHHH from under the table. Finally, the thirteen year old erupted, “Does anyone else hear that noise?!” I was petrified. Luckily the mother (either because she knew it was me or was completely deaf) replied that she didn’t hear anything and change the topic of conversation. A few minutes later, the girl piped up again, “I think it’s the dog, she’s really loud tonight.” I hated to use the nice, and relatively quiet, dog as my scapegoat, but I refused to come to it’s defense and ruin my first impression with my new family. The rest of the evening past without incident and assuming they never stumble on this entry, I think I’m in the clear. We played a lengthy game of Trivial Pursuit (this particular “international” version was impossible) and hit the hay. A small note on the extent of warmth of the family: the two daughters gave up their rooms to the visiting students (there were two of us and we’d been roommates during orientation) and refused to let us share a room. The mother slept on a couch and also refused to move.

The next morning we met their neighbors and headed off for a hike around the nearby lake. It was windy and wet, but that seems to be the usual forecast here. One of their neighbors was a tall Englishman with a heavy accent who was very entertaining, when I could understand him. He made plenty of jokes about the weakness of the American dollar and soon we were trading friendly put downs about each other’s countries. He remarked how easy it was to be an American History major, because “you blokes don’t have any history at all!” The walk consisted mostly of dodging huge puddles on the path and snapping pictures of the expansive, gray and windy landscape. The entire area reminded me of a mountainous and foggy Maine. 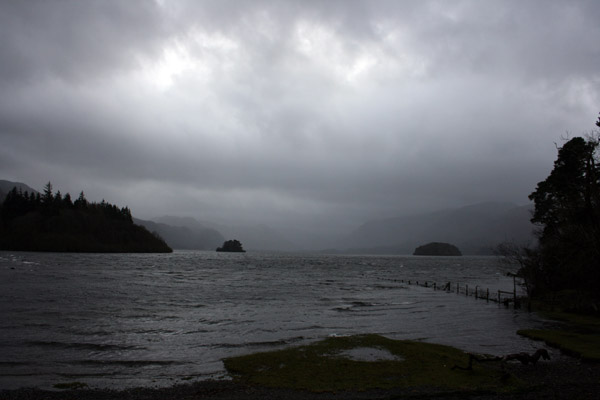 Even though the conditions were less than perfect, it gave me a great feel for the region. I was impressed by how many elderly people were out walking and particularly a group of four men in there 70s who had the veteran “fell-walking” poles and looked completely at home on the trail. We ended our hike with a cup of piping hot chocolate in the nearby town, which greatly resembled a ski-town. Finally, we picked up some haggis to celebrate Burns Night and headed back to our little cottage by the river. After dinner we enjoyed tastes of a variety of whiskey and while it’s definitely not a drink of choice, I’m beginning to appreciate the subtle differences in flavor. The neighbors came over and we spent the night discussing town lore and other gossip. Everyone was friendly from the minute you met them and I immediately felt at home. 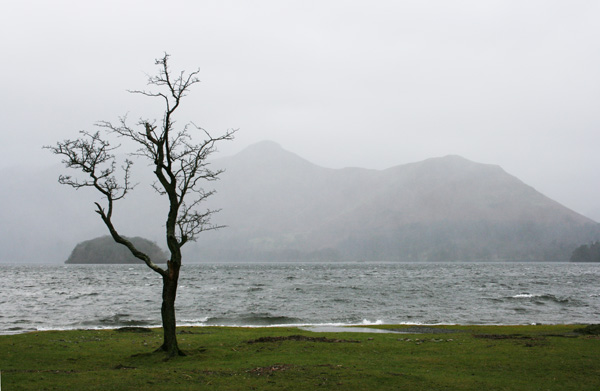 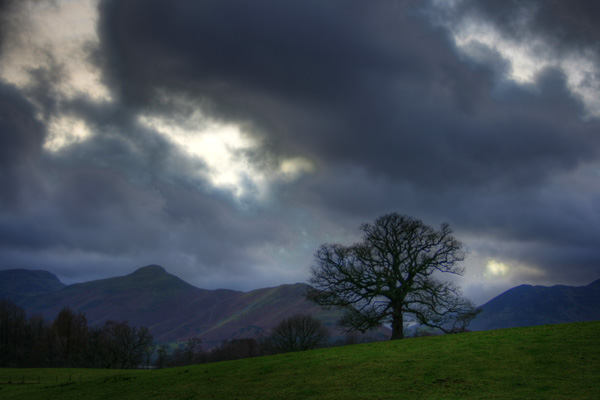 The next day we woke up late to the surprise of a sunny day. Our host family led us out on a walk all around their area and soon we were cutting through sheep herding pastures, streams and what felt like back yards. At one particular gate I was greeted by a large ram who slowly followed me and progressively picked up pace until I was running away trying to get pictures of the whole affair. I barely escaped by slipping through another gate and on the return walk he thankfully kept his distance. The countryside was remarkably quiet and peaceful, reminding me of a mix between Maine towns and Virginian farms. 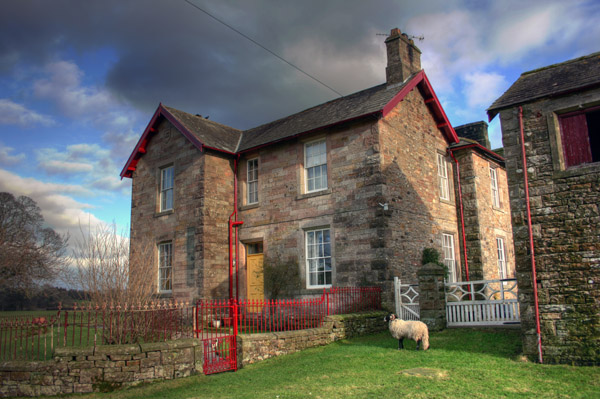 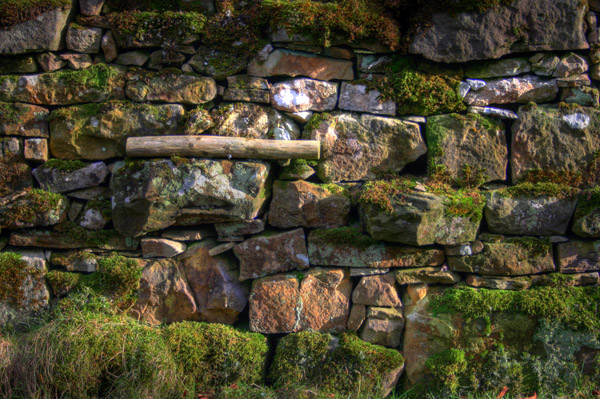 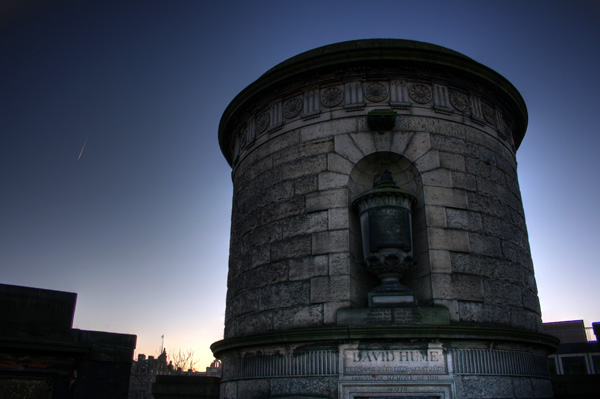 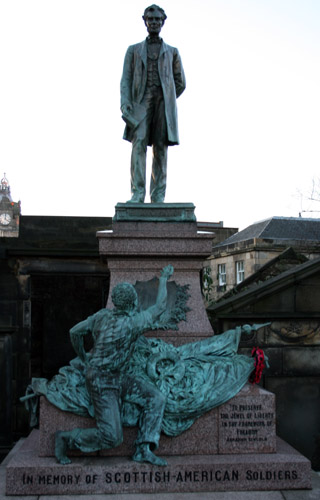 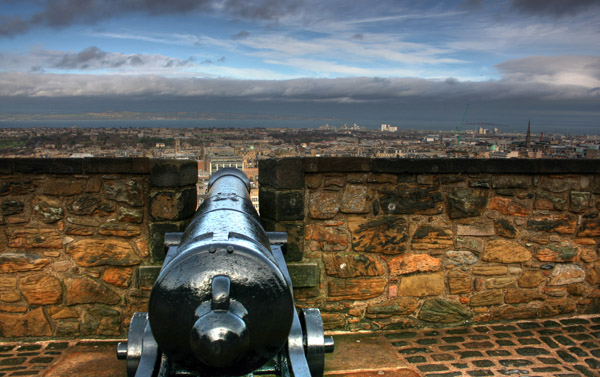 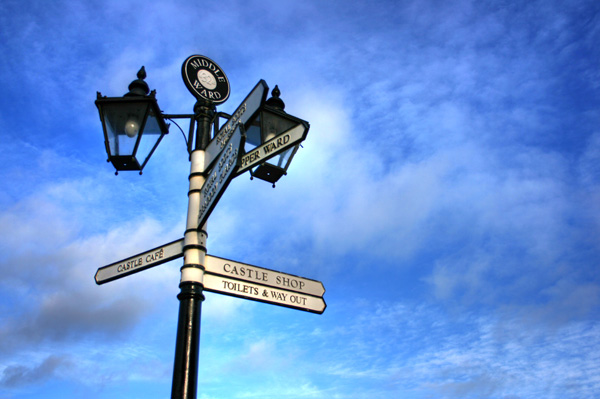 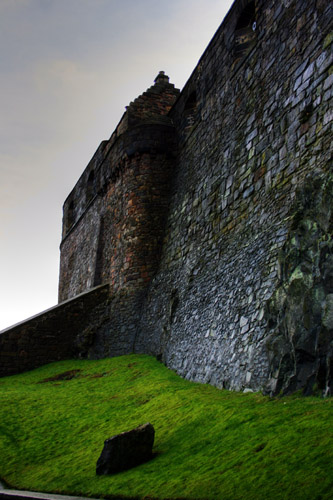 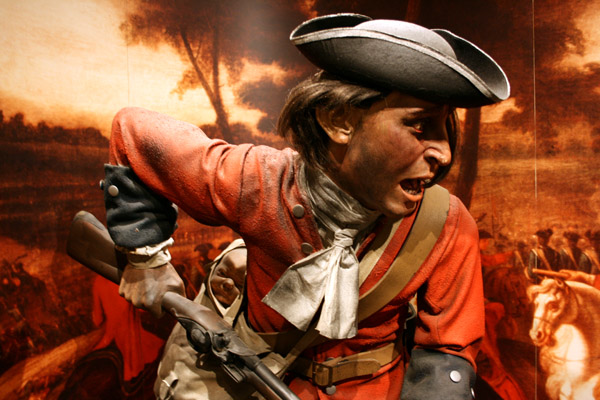 Finally. I had the notorious haggis. Much to my surprise it looked like ground beef and tasted incredible. There was a spicy after-taste and it was very filling. Deep down I knew that it was a pile of mutton thrown through a JuiceMan and then wrapped in the poor sheep’s stomach, but all in all, it was fantastic. If I ever have the opportunity in the future (which I certainly shall), haggis will be on my plate. As for the “neeps” (turnips) and “tatties” (mashed potatoes), I’m not so sure, they were equally pulverized and didn’t add much to the meal. As for presentation, the Scots definitely go for the straightforward approach. My dinner looked like it had come from the Sloppy-Joe Lady in the cafeteria. Finally, here is a picture to prove I had it. 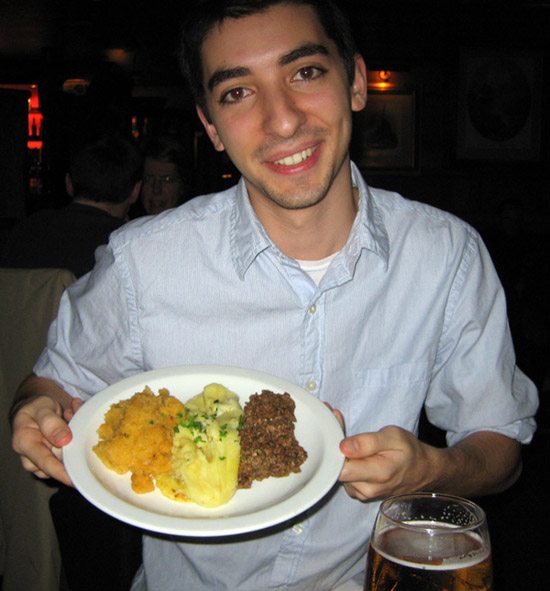 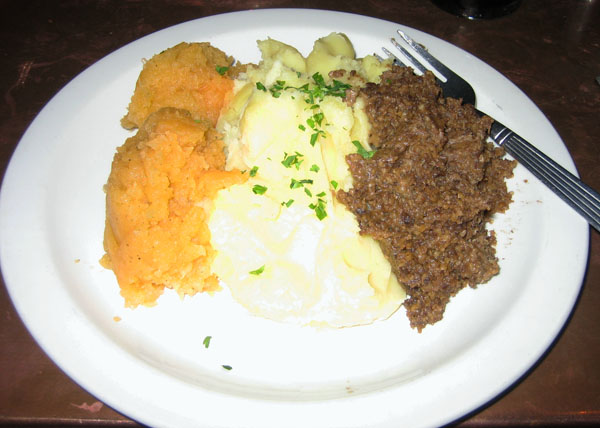