My travels begin with an overwhelming welcoming party after an extensive day of traveling. Without going into boring details of plane transfers and whatnot, I’ll just say that the most riveting moment involved me being forced to combine my traveling carry-on (packed tightly with a brick of vacuum sealed clothing) and my little camera bag. It was a completely unnecessary combination to simply pass through a single checkpoint that exemplifies the confounding aspects of modern air travel.

After getting into downtown Lisbon, slightly frazzled from travel, I wandered the streets until I tracked down the apartment Ain had kindly discovered. We had rented it out for a few days with some friends of his from Brown. I was the last to arrive and the festivities were in full effect, I was introduced to the group with freshly prepared local food. After a night of getting to know each other we headed off for our first day of exploring the city. Our apartment was centrally located off of the Marquês de Pombal circle. The female half of our group had to deal with a medical annoyance and so that left the four lads to scour the landscape for sunny cafes and ancient nooks. Our first stop was the Convento do Carmo which was a cheap escape from the noise and populated streets outside its ancient walls.

We were hoping not to see too much of the city without our other travelers, but honestly, just walking around the city gave us a great impression of Lisbon. We ended up relaxing in beautiful spots for an hour or so at a time before moving to our next rest stop. We went from enjoying the panoramic view of the city up the Santa Justa Lift to listening to music with a group of Angolans in a cafe next to the fountain at Martim Moniz Square. Essentially, we spoiled ourselves while the ladies had their own adventure in the nearby hospital. 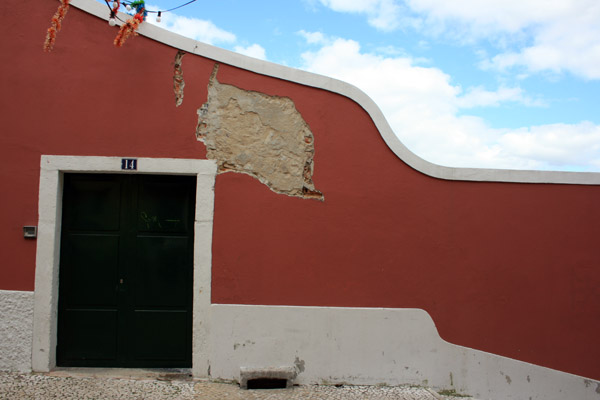 After meeting up with everyone we continued strolling around, but this time we saw some of the actual sights of Lisbon. First we went to the water and saw one of the huge bridges that crisscrossing the river Tagus (Tejo in Portuguese). We moved up the hill and saw one of the oldest cathedrals in Portugal and finally ended up seeing the sunset from the Castle of São Jorge. I convinced everyone the sunset would be great and it actually was quite lackluster. It became cloudy and hid the sun, but the city was still beautiful thanks to the lighting of downtown. 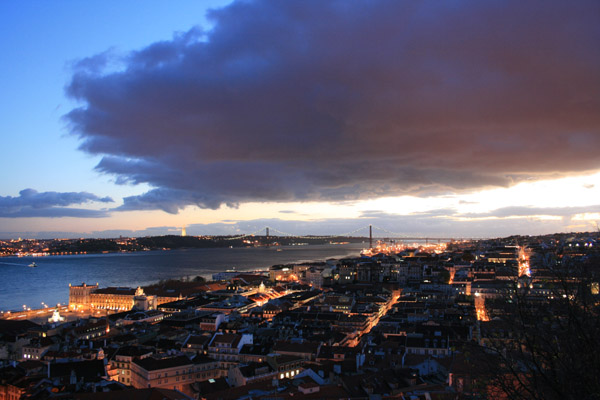 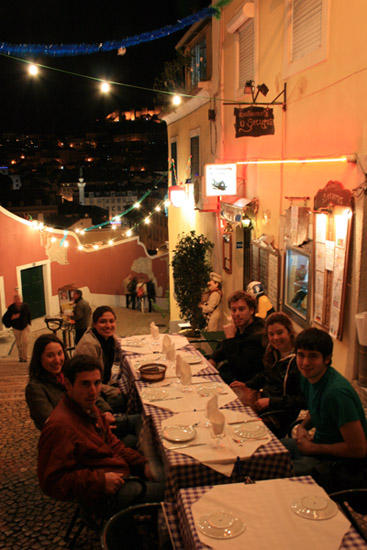 After descending the hill, we made our way back up through winding roads. The endless stream of servers heckling you to enter their establishments is a practice that can make someone jaded about the dining experience in Europe quickly, but we ignored their pleas and settled on a place with an outdoor seating arrangement. Two things were wrong with this seemingly picturesque setup. Outside was on some stairs, that were frequented by flower sellers and other pedestrians. It also got very cold once the sun set. Despite these setbacks, we enjoyed a meal of lightly fried food, including the exotic “Black Jewfish.” We hustled home after our meal and hung out back at our apartment.

The next day we made the trek out to Belém Tower and strolled along the water taking in other monuments like the Padrão dos Descobrimentos (Discoveries Monument) and the Jerónimos Monastery. 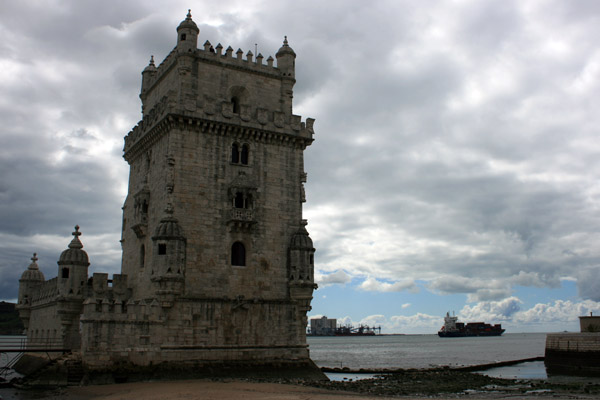 After browsing the sites during the day, we checked out the nightlife in the popular Bairro Alto neighborhood. It is essentially an all-pedestrian neighborhood with hundreds of little bars and restaurants. We met a lot of locals, tourists and local students. The following day the ladies left us and the guys moved to a hostel a few blocks away. It was newly renovated and on the top floor of an office building converted into a hostel. We met other travelers and vowed to meet up with them later. During the day we took a 40 minute train to the beach town of Cascais, wandered the streets and tried the infamous Bacalhau for dinner. Bacalhau is dried and fried cod, but despite these horrifying properties it was actually quite tasty. The weather was perfect and we soaked up the sun accompanied by local beer.

I could end the story there, but some of the most eventful days were our last. Ain and I were left alone for the final few days and while we absolutely loved Lisbon, we were eager to continue to explore new places. On of his friends from Brown offered to put us up in her apartment when we came to Barcelona, so we decided to shift our plans and have more time in our next destination.

The main hitch in our plans was our lack of housing for the final night in Lisbon. We spoke with the hostel and while they originally said they couldn’t offer us a room, we were approached later in the day by a squadron of business people who gave us an offer we could not refuse. “You can stay in our offices for the night and we will provide cots.” Sounds pretty bad until you factor the uniqueness of spending the night in an office. It ended up being a huge law firm and they were unbelievably trusting with us. They gave us the only key to the building and left all sorts of private documents laying around. We didn’t browse, but we couldn’t ignore the check for half a million Euros sitting plainly on a desk. The next morning we had a memorable escape in the wee hours of the morning and rushed off to our flight dazed and giddy with excitement. Next stop, Barcelona.