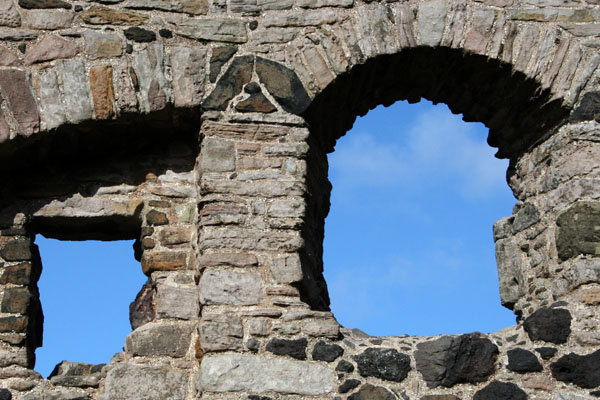 Last week was a fantastic break from my routine because my good friend Charlie visited from London. Frankly, I was nervous he wouldn’t have a good time because he lives in London and decided to exclusively visit me in Edinburgh for his spring break. My fears were quickly put to rest as he seemed ecstatic to be seeing a new place and was stunned at how cheap things were compared to London. During one of my free days we had a whirlwind tour of the city. It started with another climb of Arthur’s Seat which turned into a battle with the wind. The weather was clear and seemed warm so we ventured out without coats. This was a poor decision as the angles of the climb turn the path into a wind tunnel. At one point up the climb Charlie attempted a steep angle and got trapped while the wind tore at his shirt and muffled his yells. We retreated and took a new direction, finding the summit just as bad as we feared. I can confidently say this was the strongest winds I have ever experienced and we had to lie flat in the goose-poop infested grass just to escape. 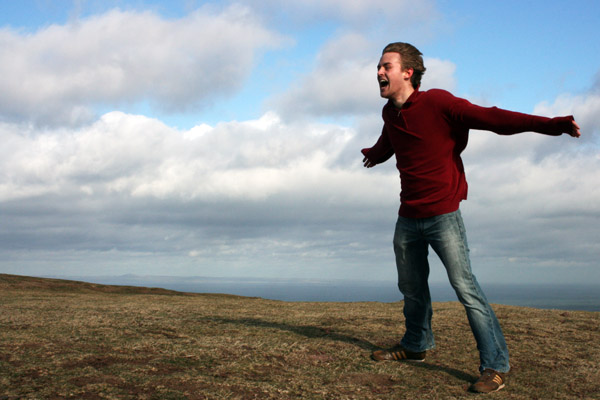 After our taxing climb we headed back into town and strolled along the Royal Mile. Our pace allowed us to stop in the Holyrood Palace entrance, the Parliament security checkpoint and the Kirk of the Canongate cemetery holding the remains of Adam Smith. It took us a long time to actually find his grave but in the mean time we found some interesting landmarks including one dedicated to the “Society of Coach Drivers in Canongate.” For lunch we dined in a little pub that served as Charlie’s first experience with haggis. Despite the cautious expression in the picture, he actually enjoyed it. 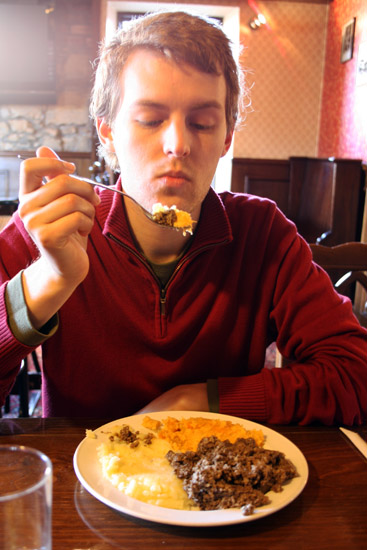 After lunch we spent some time in the National Museum and joined some dancing children in watching the Millennium Clock ring in the hour. The rest of his visit proved less eventful but just as fun. We went out with my friends here and got to see other parts of the city. Unfortunately, Charlie had to leave early because that weekend I was going on a trip to Loch Lomond. We ran across town to catch his bus back to London and I packed and took a bus for the weekend later in the afternoon.

Loch Lomond is a beautiful place. However, it was not a beautiful weekend. It rained the entire time we were there and while we got to hike and try some Scottish activities, the fun was clearly dampened by the weather. I brought my camera but didn’t dare to bring it outside since downpours were so frequent. We did some hill-walking in an area called Drymen, which was somehow pronounced “German.” We were able to watch the historic routing of England by the Scottish rugby team in a local pub. I think us Americans were the most excited in this particular pub since it was the final game of the Six Nations rugby tournament and Scotland was dead last with no wins. On the last day we headed out to a somewhat cheesy activities fair. This included learning basic bag-piping, archery and the classic tossing of the caber. It was raining on us very hard for most of the time so spirits were quite low but it was a rare opportunity to throw a tree trunk (though the one we used was not as large as most photos found online). My attempt did not cause it to bounce and flip forwards as intended and I was advised to use “a wee bit more force next time.” After warming up on the bus we settled in for the trip back to Edinburgh, all in all it was a unique experience that I would recommend attempting in dryer conditions.

One Reply to “Charlie Visits and a Loch Lomond Jaunt”