Over this weekend I ended up going on a semi-spontaneous trip to Glasgow. I hesitate in using the word “trip” because I was there for less than 24 hours, which also explains why this almost photo-less entry will be extra dry. It started with a short and cheap bus trip to the city center late on Friday evening with 3 friends. Initially our evening consisted of wandering around looking for our hotel. For those of you unfamiliar with Glasgow’s reputation, it’s a sprawling city with a focus on industry and being generally gray at all times. 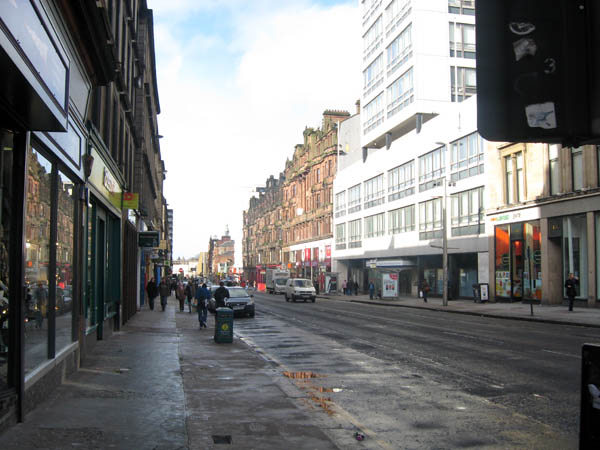 We arrived around 8 pm and followed vague compass-based directions to our beds for the evening. It took us over an hour and we got caught in a rain storm that briefly turned into hail. Finally, our destination was found, it was a hostel/hotel adjacent to a large football stadium for the Glasgow Warriors. We were right behind the field and had there been windows on that side of the building, it would have been a fantastic view. It’s also important to mention that there was a game going on while we looked for the hotel, so our wandering around was accompanied by occasional whoops and massive oooohs. According to their website, the game that night was a win, which would explain the happy crowds pouring out of the arena as we finally got into our rooms. We dried off and got ready to go out for the night, but spirits were low because we knew how far away we were from the city center and how rainy it still was. Eventually, we trekked out. After testing the waters in a club with 4 people on the dance floor, we found ourselves in the “Silk Club” that had a 3 pound cover despite the promotional card we were given promising free entry. This would set the tone for the evening. To get our money’s worth, or for some other reason that escaped me, we remained there until 4 am when it closed.

This is when things got interesting. As the crowds of scantily clad party goers spilled onto the streets, the calm night was pierced with drunken hollers. We quickly scampered to find a ride home, since the long walk seemed impossible. Our efforts to hail a cab failed. One cab driver slowed down to a drive-by speed and asked us where were going in the tone of voice of a someone afraid of getting caught. We explained where we were headed and he continued to coast by, finally after understanding (or not understanding) our destination, he sped off, sans customers. Maybe we didn’t understand the system in Glasgow, or maybe taxi drivers weren’t keen on driving to that part of town. We had no idea what to think. Our efforts to get a cab lead us zig-zagging through the downtown area and took the better part of an hour. During the course of our hopeless journey, we stopped at a chip-shop. I approached some inebriated individuals and asked the system to get a cab. “You’re American?! NO WAY,” was the response I got. They quickly formed a dance line and broke into song, “New York, New York!” When they finished, they patted me on the back, “Now you sing the Scottish national anthem!” Uh…I was trapped. “Sorry mates, I don’t know that tune.” Blasphemy! Instead of giving me a Glasgow Kiss that I had been expecting, they promptly broke into song again. This time, the owner of the store had enough of their singing and kicked all of us out.

Once on the street, they calmed down and I was able to get a phone number for a cab company. The representative I spoke to had neither heard of the street our hotel was on or even of the stadium for the Glasgow Warriors. “Are you going to somewhere remotely near Glasgow?” I responded, “We’ve walked there twice, how can a taxi not reach it?” I was on my own he assured me. Eventually we learned that all taxis go by a set location in downtown where party goers form a queue. We tracked down this queue and after discovering it numbered at least 200 people, we decided finally to walk. And so our long day ended with an even long walk home.

The next morning, we rose early considering our bedtime so we could check out of our rooms. We spent ages finding a place to have breakfast that wasn’t a Subway, gambling establishment or a shut down restaurant. We settled on a fancy Italian place that didn’t open until noon. After refueling, we checked out the large pedestrian avenue called Sauchiehall Street. It was at this point that I realized how much Glasgow reminded me of Santiago, Chile. Santiago is at least three times as large and has the benefit of beautiful mountains, but they both have a huge pedestrian street running through downtown that is chaotic and dirty. We stopped in a clothing store and I discovered that clothes here are actually dirt cheap. A friend of mine got a full suit for 25 pounds and I got some swim trunks that I needed for 2.50 and a lambs-wool sweater for 7 pounds. Another benifit of shopping here is that people are not all XXXLs like in the states. Multiple items in my size?!

Later in the day we stopped at a coffee shop to keep our energy up and meet a friend who goes to the Glasgow School of Art. It was here, in the most unlikely of settings, that the most interesting aspect of our travels occurred. A man who cleaned counters and emptied the trash approached us and asked us for a favor. He was wondering if we could edit a paper he was writing because his English wasn’t very good. Umm…sure, why not. He was elated and disappeared to get his essay. We weren’t really prepared for the 5 chapter tome he dropped on us, but we made our way through his draft with pens and coffee supplied by our new friend. It took us a long time to work through his paper because a lot of the tenses and words were confused or translated oddly, but we all felt productive helping him out. We later learned he was from the Ivory Coast and was getting his Master’s degree. It took us until closing time to finish, but he waited and thanked us dozens of times. It was tough to edit but overall an interesting and memorable experience.

From there, we were so tired we just went back to the bus terminal to catch a ride home. While this entry seems surprisingly negative, I had a good time and will definitely be returning to Glasgow. We never got to see any sites, the weather was terrible and our time was quite limited. Now I have returned to balmy Edinburgh and further work for my final 3 weeks of classes await.