On Saturday I planned on trying haggis. Unfortunately I couldn’t find a pub able to serve my specific needs on a weekend night. Haggis, to those lucky enough to be ignorant of it’s ingredients, is the infamous treat of the Scots. It consists of the sheep’s lungs, liver and heart all mashed together with spices and a load of oatmeal. This lovely combination is then boiled in the sheep’s stomach for a number of hours. Sound exciting? I’ll report back. The other foods I have been eating have been much more tasty and easier to prepare. Since my flat is very accommodating, it offers the lovely modern feature of being “self-catered,” which I commonly compare to “self-valet” or “self-housekeeping.” At the beginning of the experiment of independent living, things looked grim. My first meal was an old favorite. Pasta. But what to use for sauce? Avast! I have a can of beans, why not just throw that on? Using clever male wit learned from the oh-so-helpful “A Man, A Can, A Plan,” I poured my beans over an already heaping pile of spaghetti. Little did I know that the certain beans I had purchased were kept in a horrid tomato sauce that tasted more like child’s medicine than anything else. Here was the result: 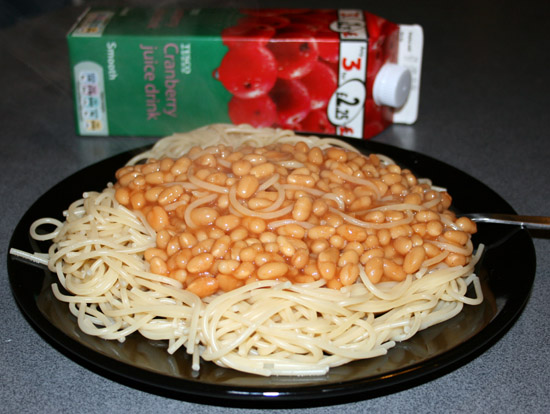 Luckily, with time and some ideas stolen from my resourceful flat-mates, my diet has improved. The folks I’m living with are a diverse and lively bunch. It took me a long time to finally meet all of them because we never had a group introduction or common time for meals. Finally, after popping my head out whenever I heard feet scampering past my door, I met them all. I am living with five other guys, four of whom are international first year students and one other American. There is a Brazilian guy who lived in the neighborhood next to my sister in Rio, who became a vegetarian on a whim and is struggling to follow the rules. There is a Pole who listens to loud bass-heavy club music, but was very helpful in setting up my internet. A New Zealander who is a great cook and gave me an impression of how students feel about their classes here. I asked him if he had class as I was walking out the door and he said yes, but that he “couldn’t be bothered, because it’s raining.” The American is a guy who is on the same program as me and calls me “Big Guy,” which is either a joke (because I neither the largest horizontally or vertically) or he just calls everyone that. Either way, they are an interesting group and I’m happy with my living arrangements. Overall, I’m still adjusting to the minor changes across the pond, whether it’s discovering 2% milk is the same as “Semi-Skimmed” or learning not to walk on the little metal markers for crosswalks (they’re a deathtrap when it rains and I’ve seen many people slip).Now on to some interesting stuff. Today I’ve been sorting through dozens of pictures from my trip to Arthur’s Seat. It normally should be a short hike, but thanks to icy rocks and many pictures, it took the group I traveled with most of the afternoon.

A marathon or some other running competition at the base caused all sorts of commotion and we started up the wrong peak accompanied by distant whoops and jeers. The race circled the open green area at the bottom of the hills, behind the Queen’s residence (one of many homes for royalty scattered throughout the UK). I later found out that the race was the Bupa Great Edinburgh International Cross Country.

As we made our way up the grassy hill we encountered increasingly vast panoramas and darker skies. This first panorama was pretty early in the hike the sky was actually visible.

The City of Edinburgh is built very close to the cliffs and I was surprised that I hadn’t noticed the immensity of Arthur’s Seat during my time in the city. I spend most of my time in the neighborhoods of Old and New Town, the Grass Market and the University buildings around George’s Square. 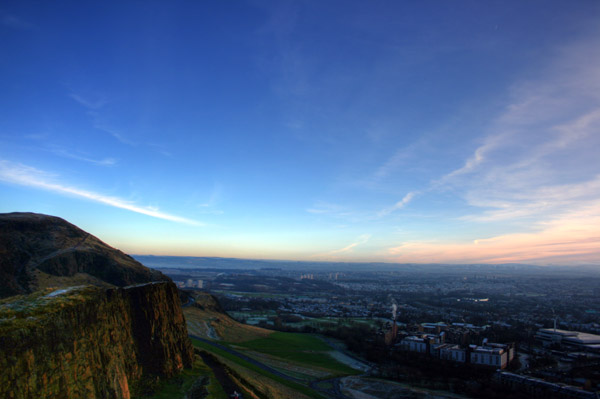 Thanks to the slippery rocks, our pace plummeted while we maneuvered our way to the actual peak looming behind our first wimpy hill, known as Salisbury Crags (not to be confused with the Aggro Crag). I rescued a fall and turned it into a steeple chase and went barreling down the mountain. When I finally stopped I was not only down off the first little hill, but I’d gone below our destination, making my explosion of speed completely useless. We met up at the base of the rock steps and climbed the flat icy rocks at our own pace. When we made it towards the top a friend proposed we race the final distance. The two of us set off in a sprint up the hill, but people were sharing the path ahead of us. I made the decision to cut up the rock face and with the ferocity of a crazed chimp, I made it up alive. We got some group pictures and headed down as it was quickly getting dark.

The decent was much more painful and treacherous than the ascent, with most members of the party taking a spill. As we made our way down, clouds swept over the mound and made us glad we left when we did. The cross country race had finished up and we navigated our way back into the city in search of food and a place to sit down.

On a completely unrelated note, I have discovered that pigeons here are quite unintelligent. On top of the episode of the bird flying into a wall, I accidentally kicked a pigeon while walking briskly to class. In DC, pigeons are quick to hop or otherwise escape from your feet in a ruffling of feathers, but this unfortunate fowl got a swift kick to the noggin. I guess I’ll have to be more understanding of the simple Scottish game.